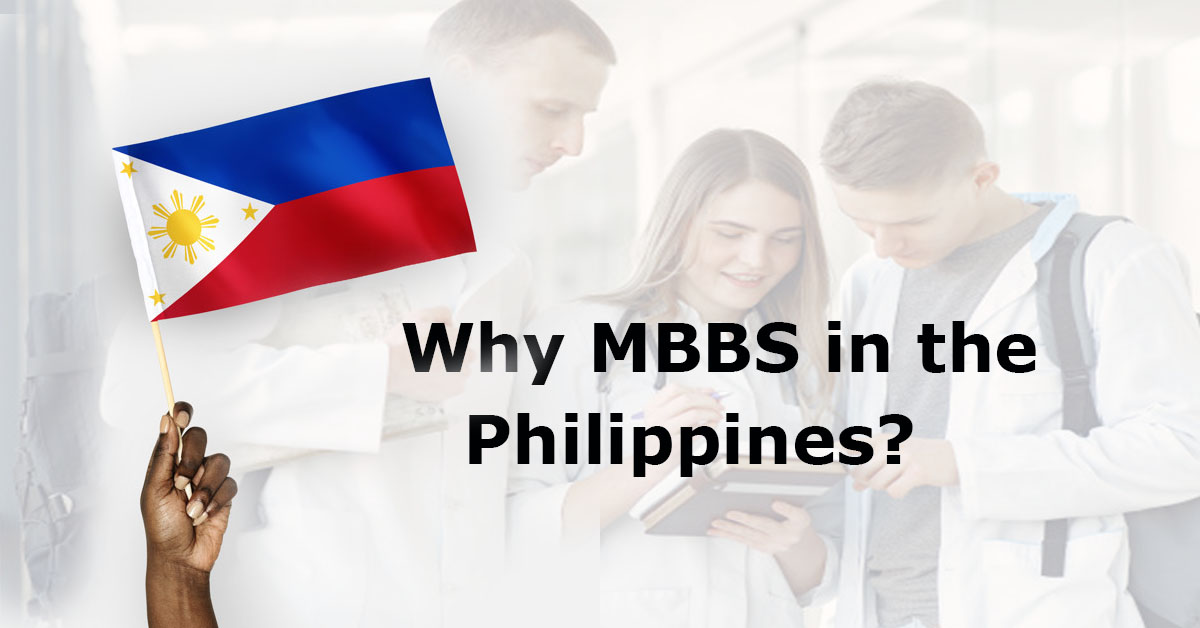 The Philippines is an archipelagic country, with over 7400 islands. It is located in south-east Asia between the South China Sea and the Pacific Ocean. Only about 1/3rd of the islands are inhabited. The two largest islands, Luzon and Mindanao make up for two-thirds of the total land area. The climate is tropical and the economy is based on agriculture, industry and services. The country’s population is around 109 million, making it the 12th – most populous country in the world. The literacy rate is 99%. The Philippines has substantial ethnic diversity. Though most people can communicate in English, the country has 19 official languages, with Filipino being the most-widely spoken one.

MBBS in the Philippines is called MD (Doctor of Medicine). Though the name is different, it’s equivalent to MBBS in India and recognized by the National Medical Commission (NMC). There are 38 medical colleges in the Philippines

Top medical colleges in Philippines are as follows.

Furthermore, Philippines follows the U.S educational model i.e. a 10+4 system, unlike the 10+2 system in India. Therefore, Indian students (NEET qualified and at least 50% in Physics, Chemistry and Biology in Intermediate or +2), have to complete a pre-medical course named BS (Bachelor of Science). The duration of this course is 10-18 months depending on the medical university you get into.

As mentioned earlier, MBBS is a 6-year program which includes the one-year internship and BS. After the completion of BS, you have to clear an entrance test named NMAT (National Medical Admission Test) to be eligible for admission to MD (MBBS). Some universities allow you to join the MD (MBBS) even if you don’t take NMAT. However, you will be awarded the MD (MBBS) only if you clear the NMAT with at least 40%. Once you are done with your pre-med, the curriculum focuses on medicine and clinical training. Students are sent to different health centres and hospitals, where they undergo rigorous training under experienced and specialist doctors. They also have to work in various departments as part of the clinical rotation. The MBBS course in the Philippines is divided into four years, with each year having two semesters. Almost all the subjects and course- work are similar to what MBBS students in India have to contend with.

Why choose the Philippines for MBBS?

Since most people in the Philippines can communicate in English, Indian students do not face any language hurdles while interacting with their professors or with patients in the hospital.

There is no donation/capitation fee in the Philippines. The annual tuition fee ranges between 3 and 6 lakhs depending on the medical university. The living costs are also very reasonable when compared to many other countries. Since universities like DMSF provide decent accommodation on campus, the twin issues of safety and convenience are taken care of. The Davao Medical School Foundation (DMSF) also offers a combination of South and North Indian cuisines to make the students feel completely at home.

As you know, foreign medical graduates have to clear the FMGE to receive the medical license to practise in India. In its latest report, the National Board of Examination (NBE), which conducts FMGE, has pointed out that medical graduates from Philippines consistently outperform students, who complete their MBBS from other countries such as, China, Russia, Nepal, and Central Asian Republics. This performance speaks volumes about the quality of education in the Filipino Medical Universities.

Owing to the fact that medical education system in the Philippines closely mirrors the system in the U.S, pursuing post-graduation in countries such as the U.S., Canada, is always an excellent option. In fact, many Indian students, after completing MBBS in the Philippines, have been practising successfully throughout the western world, including the United States, the United Kingdom, Canada, Australia, New Zealand etc.